Swipe the icons, tap to select! 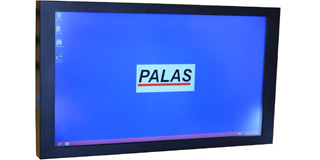 In most cheap large-format touch technologies "touch position" is calculated when a finger interrupts an optical field, infrared light beams or acoustic waves on or above the surface of the touch screen. Performance of such technologies are affected by surface contaminants and environmental interference.
What's different about 3M DST is that it precisely calculates touch locations by analyzing the bending waves within the glass substrate that are created by the user's touch. Bending waves differ from surface waves in that they traverse through the thickness of the panel rather than the surface of the material. This makes DST unaffected by contaminants, scratches, or standing objects on the screen.
Palas large format Touch Monitors, based on 3M DST touch technology offers fast, accurate touch with a response time of less than 20 ms.
Touch operation unaffected by surface contaminants like liquids, dust, dirt, grease. Ideal for Indian conditions.
Anti-reflective finish for use in high brightness areas, smooth easy glide surface coating, metal body for hot & harsh environments.